The Tang Prize logo incorporates the award’s name in both English and Chinese as an homage to the air of cosmopolitanism that characterizes the Tang Dynasty.

The design of the Chinese characters tang and jiang (“Tang” and “Prize”) was inspired by the calligraphy of the Song Dynasty artist Mi Fu. With their bold black strokes, the two characters appear as two figures walking purposefully forward. The English words “Tang Prize” intersect with the Chinese characters at the center to form a crossroads, symbolizing the connection and interaction between this East-based prize and the rest of the world.

RED, an auspicious color in traditional Chinese culture, symbolizes the Tang Prize’s passion for contributing to the development of human civilization.

A fine work of Japanese designer Naoto Fukasawa, the Tang Prize medal is shaped like a spiral and is meant to evoke images of double-stranded DNA, a galaxy, or a dragon. It curves in such a way as to never return to its starting point, a mathematical trait that symbolizes the infinite unravelling of history, growth and life.

Fanfare for the Tang Prize
From the pen of composer Yiu-Kwong Chung, the former director of the Taipei Chinese Orchestra, an artist known for his melding of East and West in his works, comes this fanfare, a musical form best representative of the Western spirit. Along with a brass quintet, one timpani, and two percussionists from the Western canon, Chung has added the ancient solemnity of the bianzhong and the unrestrained forwardness of two suona from the tradition of Chinese music to create this Fanfare that melds music and motifs from East and West.
Solemn strikes of the bianzhong are followed with the slow but invigorating tempo of the brass quintet and the percussionists as we enter the Fanfare proper. Next, the main theme of the Fanfare, full of the sprightly steps of Taiwan’s aboriginal dance; here the suona and the brass quintet develop a counterpoint, each voicing its own bold clarion call. Finally, we end with the softer sounds of the suona and brass.
Composer: Yiu-Kwong Chung
Yiu-kwong Chung is Taiwan's best known and most often performed composer, and is currently (since 2007) the General Director of the Taipei Chinese Orchestra (TCO).
During his tenure with TCO, he has written concerti for numerous top-class soloists. He conducted the orchestra’s European Tour (with soloist Evelyn Glennie) and staged performances in Bridgewater Hall in Manchester and Le Théâtre du Châtelet in Paris that brought immediate international fame to the Orchestra. He is best known for his grand, avant-garde symphonies, brass ensembles, Taiwanese national music, traditional operas, musical theatre, and new-age style pieces. 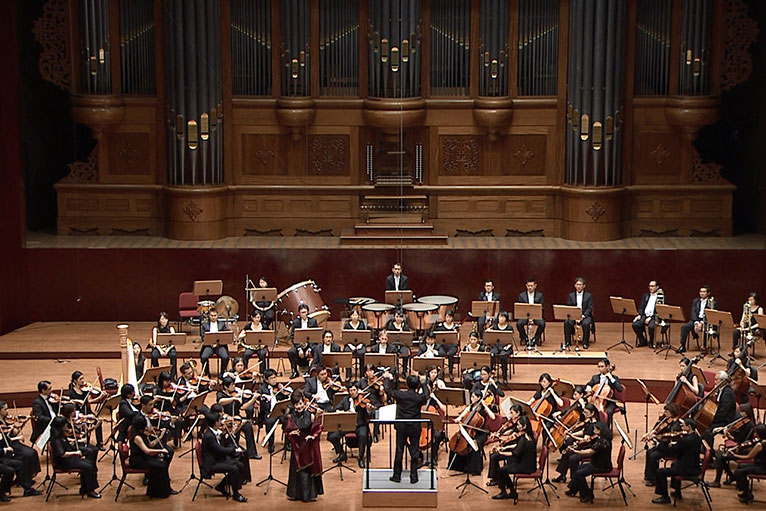 The Tang Prize diploma was designed by Jennifer Tsai, managing and creative director of Proad Identity. Throughout her decades-long career, she has won 82 international awards, the most among women of Chinese descent. Her talent is best demonstrated when she gives oriental aesthetic tradition a modern makeover. To create the visual images she was looking for, Tsai decided to draw inspiration from the four basic elements named by classical Greek philosophers as the building block of our universe—water, earth, wind and fire. They imply how integral the Tang Prize’s four award categories are to the wellbeing of humanity. Through intangible ways, the four elements converged and formed the reality as we know it today. The evolving nature of this reality also signifies how the four award categories keep getting updated to meet the urgent needs of different eras.

Water, the source of life, both reinvigorates and purifies life, so that life not only goes on but also becomes more enriched and continues to thrive.

Heaven and earth interact, and stagnation or harmony ensues, as The Book of Change denotes. Traditionally, medicine comes from plants that grow in earth. Learn how to embrace earth, so we will be able to co-exist with nature in great harmony.

A culture has its seeds which need spreading. Among all the transmission media that are immaterial, the wind has the most material presence, because where the wind blows, grass bend. Likewise, where a gentleman’s virtuous deeds are spread, people emulate.

Fire heralds the dawn of civilization. Shedding light on the logic behind law and order, it disperses the dark forces of irrationality.

The 2018 Tang Prize Diploma design has been commissioned to the world renowned Dutch book designer Irma Boom. Abstract and original, the diploma design is paper art in its simplicity, reflecting the philosophy of the Tang Prize. Vivid green, yellow, red, and blue represent the four prize categories, Sustainable Development, Biopharmaceutical Science, Sinology, and Rule of Law, respectively. The diploma celebrates the Tang Prize for its bold and independent spirit in the 21st century.

Boom’s inspiration came from The Road Not Taken of the American poet, Robert Frost. Tang Prize laureates don’t look for the obvious but step on the road not taken. They dare to think of the unthought-of and hence discover a new path. The four prize categories are folded into their own unique way, pointing to different directions that lead to greater diversity. Conventional A4 size paper is folded to break its regular outlines. This uncompromising irregularity shares its characteristics with the Tang Prize - thinking out of the box. The Tang Prize Diploma is encased, and the case opens like a door, unlocking a brand new world. 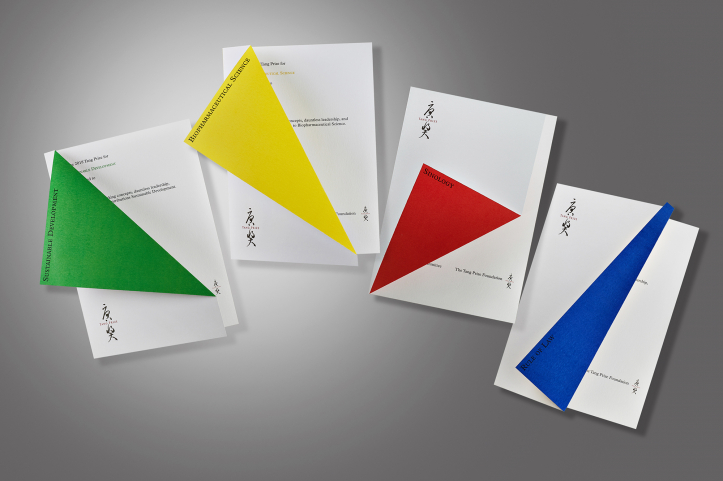 Lin Cheung, the designer of the London 2012 Paralympic Games medal, was commissioned to design an entirely new set of diplomas for the 2016 Tang Prize laureates. She first set aside any idea of the diploma as a written document; instead she focused on the base material—paper. With that commonplace substance, human beings can convey a near infinity of ideas, from groundbreaking research to an everyday laundry list. Using a unique type of paper, and through a special forming process, she gave a gentle curve to each diploma, making them able to stand freely. Then, looking to the tradition of bookbinding, she wrapped the diplomas in buckram.

The diploma for Sustainable Development, inspired by maps and mapmaking, reconfigures the continents of the world to represent a change in perspective, and the hope and opportunity that change can bring. For Biopharmaceutical Science, the inspiration was the underlying molecular structure of paper, hinting also at the structure of life. For Sinology, the eight fundamental brushstrokes of calligraphy. Since all Chinese characters use these basic strokes, these deconstructed figures represent the entirety of the written Chinese language, but also the unwritten possibilities. And lastly, representing Rule of Law are the acts of giving and receiving: of giving a helping hand, and of the values bestowed through our gestures. 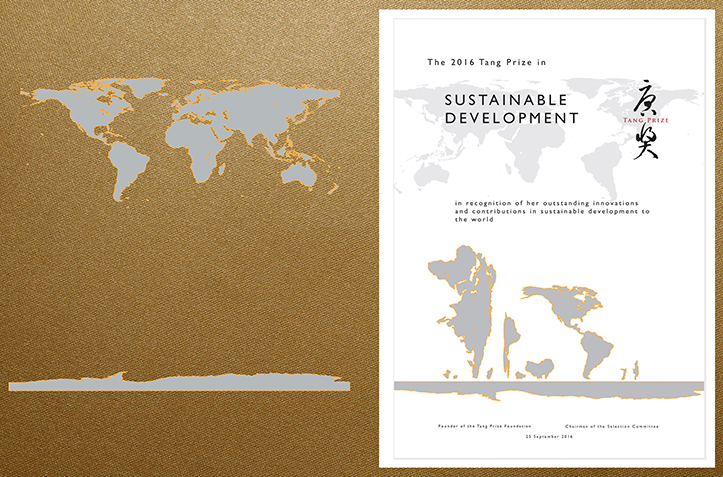 The Tang Prize Diploma “Door to Outstanding Achievements” was designed by Taiwanese designer Wei-Han Huang. It implies that the Tang Prize holds the prestigious mission of carrying us into the future. The Taiwan-sourced bamboo box symbolizes the door of inheritance. The sea water symbolizes sustainable development and the circle of life. The orchid symbolizes both biopharmaceutical science and the gentlemanly life of extreme dignity. The auspicious clouds symbolize rule of law, which, ascending to the sky, imply an era of peace and prosperity. The mountains symbolize sinology and imply the heights, the depths, and the width of Eastern culture and thought.

The primary materials employed in the diploma are silk and Chinese embroidery, which have been elaborated with a touch of modern taste. The circular shape on the door panel symbolizes the splendor of the Tang Prize, comparing it to the sun and its radiance which reaches far away beyond the horizon. 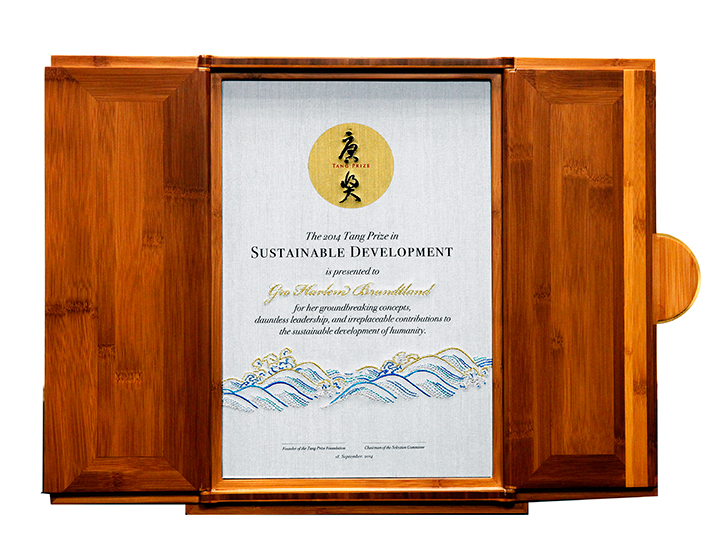