(This article is the outcome of a project collaboration between the Tang Prize Foundation and The Investigator Taiwan.)

There was a time when cancer was a synonym for incurable diseases. People are afraid of getting cancer. Fortunately, remarkable advances in modern biomedical research have allowed scientists to find new ways to tackle cancer. One of the strategies being adopted is to nip cancer growth in the bud. After decades of study and experiments, we have seen in clinical practice many scenarios where cancer growth was effectively controlled or patients were miraculously cured. Among those who should be credited for this great achievement, Dr. Tony Hunter, Dr. Brian Druker and Dr. John Mendelsohn are the names which shouldn’t be overlooked. It was thus only natural that they were jointly awarded the 2018 Tang Prize in Biopharmaceutical Science for “the discovery of protein kinase phosphorylation and tyrosine kinases as oncogenes, leading to successful targeted cancer therapy,” according to the prize citation.

September 2018 saw Dr. Hunter, Dr. Druker and Mr. Jeff Mendelsohn (son and representative of Dr. Mendelsohn) come to Taiwan to receive the awards as well as deliver edifying lectures. This report is intended to be a general summary of the stories shared by these brilliant scientists, about their research and their personal lives. It is hoped that readers can gain a deeper understanding of how they made the best of their research findings, successfully translated them into clinical applications, and as a result have benefited the whole of mankind.

Many momentous discoveries usually come in the form of beautiful encounters, and one of them took place in the Salk Institute for Biological Studies at UC San Diego. The scientist who had this fortunate stroke of serendipity was Dr. Tony Hunter, then assistant professor at the Salk Institute. After getting his PhD degree from the University of Cambridge, Dr. Hunter went to America in 1975 to continue his research, focusing on how polyomaviruses (Py) induce tumors. Knowing that “a protein called middle T antigen, which gets expressed immediately after the virus infects cells, could by itself transform fibroblasts,”[1] Dr. Hunter and his team were also “prompted by the discovery from Ray Erikson’s group that the Rous sarcoma virus (RSV) v-Src-transforming protein had an associated protein kinase activity specific for threonine.” Therefore, they “set out to determine whether the polyomavirus middle-T transforming protein had a similar kinase activity.”[2] At that time, only serine and threonine were known to be phosphorylated by protein kinases. However, when trying to “identify the amino acid”[3] the middle-T protein modified, he accidentally found out that it was neither serine nor threonine. “Aware that tyrosine is the only other amino acid with a free hydroxyl group,” Dr. Hunter “crudely synthesized some phosphotyrosine, ran it against the polyoma sample and found that indeed tyrosine was the polyoma kinase target.”[4] As a matter of fact, when being asked by a reviewer of the paper Dr. Hunter and his team submitted to the journal Cell in 1979 about “what amino acid was being phosphorylated,”[5] they responded by including in their revised paper the evidence that “the mT-associated kinase phosphorylates Tyr as a new figure.”[6]

After taking a break, Dr. Hunter returned to his lab for more experiments in order to “prove unequivocally that mT was being phosphorylated on Tyr.”[7] Often describing his discovery of tyrosine phosphorylation as “serendipitous,”[8] Dr. Hunter talked about how he discovered tyrosine kinase because he was “too lazy to make up fresh buffer”[9]before doing an experiment one day. However, as the pH of the old buffer he used dropped from the usual 1.9 to 1.7, it allowed phosphotyosine to be resolved from phosphothreonine. In addition, he “later ran a sample of the Src kinase product as a control” and, to his amazement, it “turned out also to phosphorylate tyrosine,” which disproved Dr. Erikson’s report that “Src is a threonine kinase.”[10] Dr. Hunter and his colleague repeated the experiment to verify this extraordinary result. They then submitted a paper which describes this tyrosine kinase activity of v-Src to the journal PNAS, and it got published in March, 1980. Dr. Hunter’s experience of finding something no one had ever noticed before should be held up as an example of how scientific experiments should be conducted. It tells us that great achievements do not come from lucky accidents. On the contrary, it takes deep scientific knowledge to answer those confounding questions and it takes meticulous attention to spot the reality that is easily ignored by everyone.

During recent years, Dr. Hunter and his colleagues continue to explore the relevance of tyrosine phosphorylation to cancer. One of their studies looks at how leukemia inhibitory factor (LIF) secreted by pancreatic stellate cells (PSC) can induce the phosphorylation of signal transducer and activator of transcription 3 (STAT3) in cancer cells to “drive pancreatic ductal adenocarcinoma (PDAC) progression.”[11]Their research has provided support for the development of relevant drugs. Another project they are running is aimed to examine histidine phosphorylation that has been detected in eukaryotic cells, an enzyme called NME1 (also known as nucleoside diphosphate kinase A) that can phosphorylate histidine, and LHPP, a histidine phosphatase that can function as a tumor suppressor. It is hoped that this investigation will produce more spot lights in the future research of histidine. 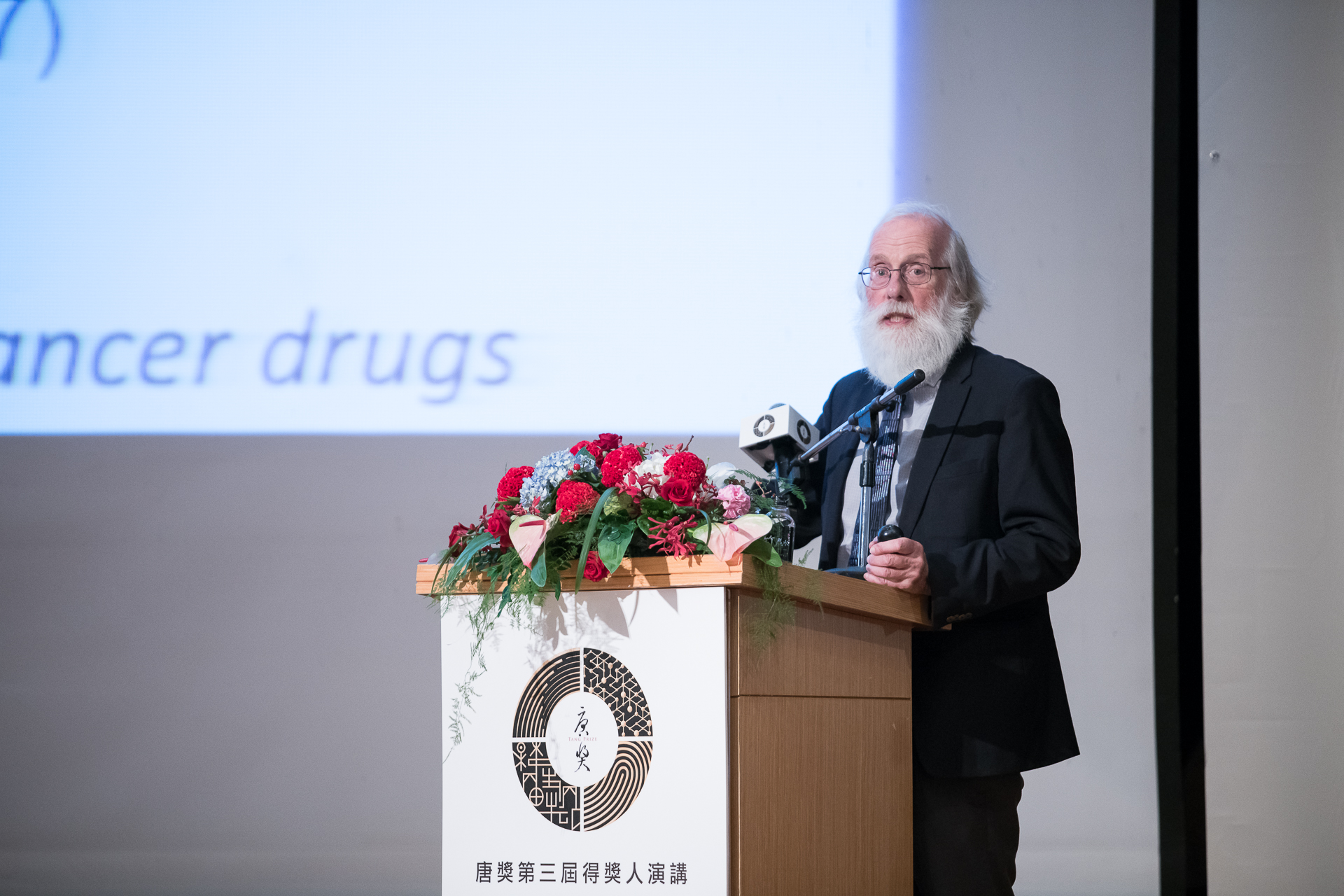 The “magic bullet” was not developed overnight

As biological science keeps flourishing, scientists are provided with more theoretical foundations to make continued effort in the quest for effective cancer therapies. The discovery of tyrosine phosphorylation has enabled the scientific community to have a clearer understanding of the mechanism of cancer cell growth and to break new ground in the development of anti-cancer drugs. One of these drugs, which was given the appellation “the magic bullet” is imatinib, sold under the brand name Gleevec, and Director of the Oregon Health and Science University (OHSU) Knight Cancer Institute Dr. Brian Druker is the developer of this miracle drug. Starting his career as a clinical oncologist, Dr. Druker witnessed first-hand the agonizing pain patients undergoing chemotherapy or radiotherapy have to endure. Growing incredibly frustrated at the devastating side effects of these types of therapy, he began to ponder the possibility of finding a way to kill cancer cells without harming normal cells. At the time, however, this idea was met with incredulity because many people in the pharmaceutical community thought to treat cancer with one single agent was an idea too simple to be ever successfully implemented.

Though Dr. Druker’s career didn’t get off to a good start, the concern for his patients in clinic motivated him to continue his research on the study of chronic myelogenous leukemia (CML). The earliest clinical description of CML dates back to 1845, since which time doctors and scientists, one after another, have made serious attempts to find a cure for it. Arsenic was once used to tackle CML. Unfortunately, it can only get patients’ white blood cell counts under control but failed to prolong their lives. In the 20th century, doctors begin to resort to chemotherapy, radiotherapy and even bone marrow transplants. In 1959, the Philadelphia chromosome was first detected. In 1973, the translocation between chromosome 9 and 22 in patients with CML was reported. In 1985, it was confirmed that this translocation would result in a BCR-ABL fusion gene with deregulated tyrosine kinase activity that causes white blood cells to proliferate constantly. These advances in basic research further incentivized Dr. Druker to develop a tyrosine kinase inhibitor (TKI) to help patients suffering from CML.

Leaving Harvard University for OHSU, Dr. Druker had one goal in his mind, to find an ideal drug to treat CML. He got acquainted with Dr. Nick Lydon, who sent him a handful of compounds, among which Gleevec was the most effective one after tests were conducted in Dr. Druker’s laboratory. Despite this, pharmaceutical companies were not convinced that it was worth their investment. To make matters worse, they were hit by some setbacks in the animal studies. Nonetheless, Dr. Druker refused to give up and finally persuade the drug company, Novartis, to start patient trials, and then exciting news began to come through. In one of the first clinical studies, it was reported that “complete hematologic responses were observed in 53 of 54 patients with CML treated with daily dosage of 300mg or more and typically occurred in the first four weeks of therapy.” Moreover, “the results of a five-year follow-up study” demonstrated that “after 60 months of Gleevec therapy, 98% of patients had shown a complete hematologic response…with a relapse rate of only about 17%.”[12]This remarkable success rate not only gave the entire medical community a shot in the arm but also saw the US Food and Drug Administration (US FDA) list Gleevec as one of the first drugs to be evaluated. Soon Gleevec was granted the approval to enter the market and it has since saved hundreds of thousands’ lives. 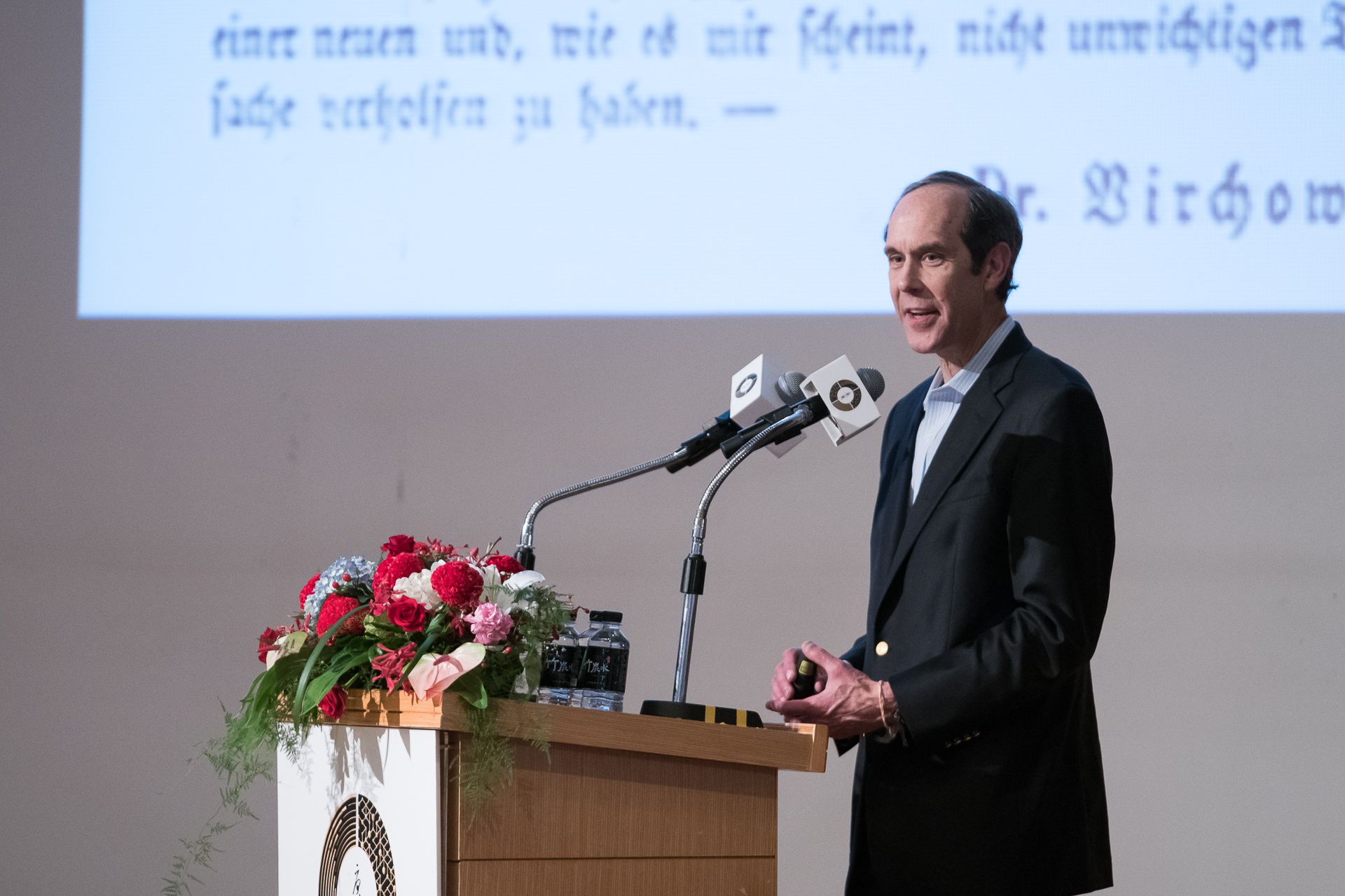 When it comes to fighting cancer, a specific tyrosine kinase caught Dr. John Mendelsohn’s attention: the epidermal growth factor receptor (EGFR). Overexpression or mutation of the EGFR is the cause of many cancers, including colorectal cancer, breast cancer and lung cancer. In 1980, Dr. Mendelsohn and his colleague Dr. Gordon Sato hypothesized that antibodies could block the signaling pathways activated by the EGFR. Therefore, they wanted to develop monoclonal antibodies that could inhibit tyrosine kinase. This idea, however, raised skepticism, as many people doubted that monoclonal antibodies could be turned into effective drugs. For a while, nobody was willing to give them sufficient funding for this research. Nonetheless, they continued this arduous journey and finally reached the destination when they developed the monoclonal antibody, C225. After many clinical trials were conducted, the US FDA approved it for treatment of colorectal cancer as well as head and neck cancers. The drug is known as cetuximab, and is distributed under the trade name, Erbitux. It was the first targeted therapy that used an antibody to inhibit tyrosine kinase activity, substantially increasing the survival rate of people with colorectal cancer. It took more than two decades to turn Dr. Mendelsohn’s proposal into a great achievement. This achievement, however, has enabled the development of targeted cancer drugs to thrive and facilitated wider application of monoclonal antibodies in cancer treatment.

Dr. Mendelsohn’s talent for biomedical research also served as the foundation for his role as a leader. He was founding director of a National Cancer Institute-designated center in UC San Diego since its inception in 1976, and in 1985, he moved to Memorial Sloan Kettering Cancer Center where he chaired the Department of Medicine for 11 years. Then came an invitation to him to serve as president of MD Anderson Cancer Center, a capacity in which he showed great knack for leadership. He was as precise in decision-making as targeted therapy is in identifying specific cancer cells. He emphasized the importance of translational research and cross-departmental collaboration, successfully turning MD Anderson into the top cancer treatment and research center in the U.S. After stepping down as president, he became co-director of MD Anderson’s Institute for Personalized Cancer Therapy. The institute considers a patient’s molecular profiles, such as DNA and RNA, when designing customized therapeutic methods, which has become a popular trendy cancer therapy. As his age and health became more of the main concern, Dr. Mendelsohn announced his retirement in August 2018 and was offered the position of MD Anderson’s president emeritus. Though his long career in medicine has come to a conclusion, he has opened a new chapter in our battle against cancer where cancer research is being conducted at full throttle. 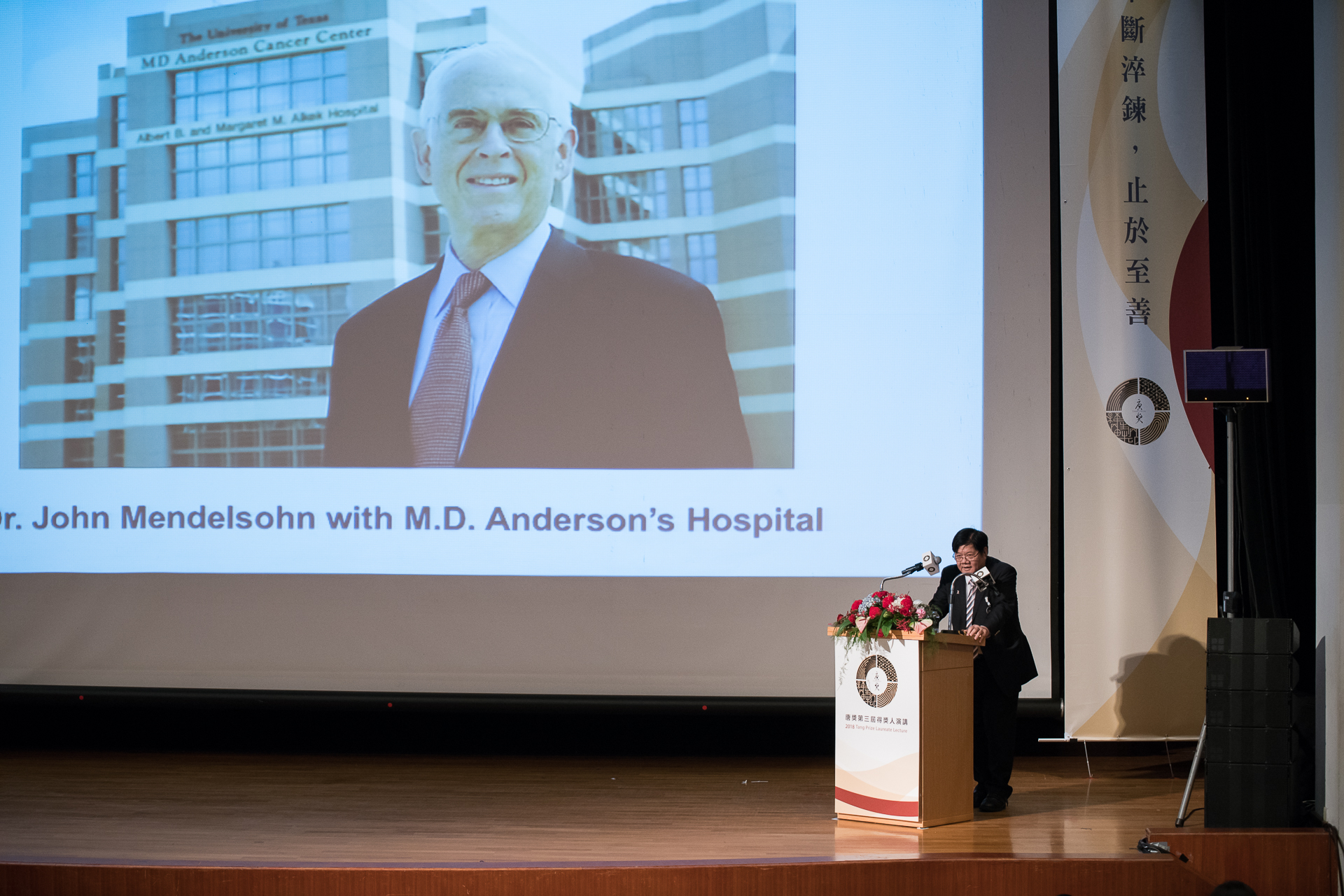 [12] “Gleevec: the Breakthrough in Cancer Treatment.”