Jenn-Chuan Chern, Wen-Long Chen, distinguished best participant designers, the jury, ladies and gentlemen, it’s great honor for me to stand here now and give some comments and some words on the jury session yesterday on the winning design and some explanations to the Tang Prize. Thank you!

First of all, I want to say congratulations to all finalists. I think our job was not easy yesterday. I always say for any competition, it is always a problem that there are other competitors, especially when you are very good. So in my opinion I think I speak for the whole jury, any of the other could have been the first prize, but there is always a little difference and I’d like to explain this little difference.

This was not an easy task for designers, and we saw so many, 10 different approaches to this. That means the solution is not easy, we have different ways to go.

So Naoto Fukasawa san was looking for one fundamental symbol that he could turn into the design and he found the symbol from the international world of science, this is the spiral curve. It is, for example, the curve of our DNA, it’s a curve of Mobius band, so it’s a very strong symbol for life and endlessness.

And then the eastern world he found another symbol, the imagination of the rising dragon, and you know the rising dragon has this wonderful tail which goes into a circle. It stands for mightiness, power, force, you know for all these things we all desire.

By taking these two ideas, he created a new sculpture, the medal as a sculpture.  The unusual thing is this medal itself is like a spiral, so it’s not a closed circle, it’s an open spiral, which is unexpected.

So he tries to express the strong idea of the Tang Prize just in one object. He did not reproduce many symbols of east and west, he just created something new so that the medal became or becomes the new symbol of Tang Prize itself. So the medal stands on its own, which is incredible. 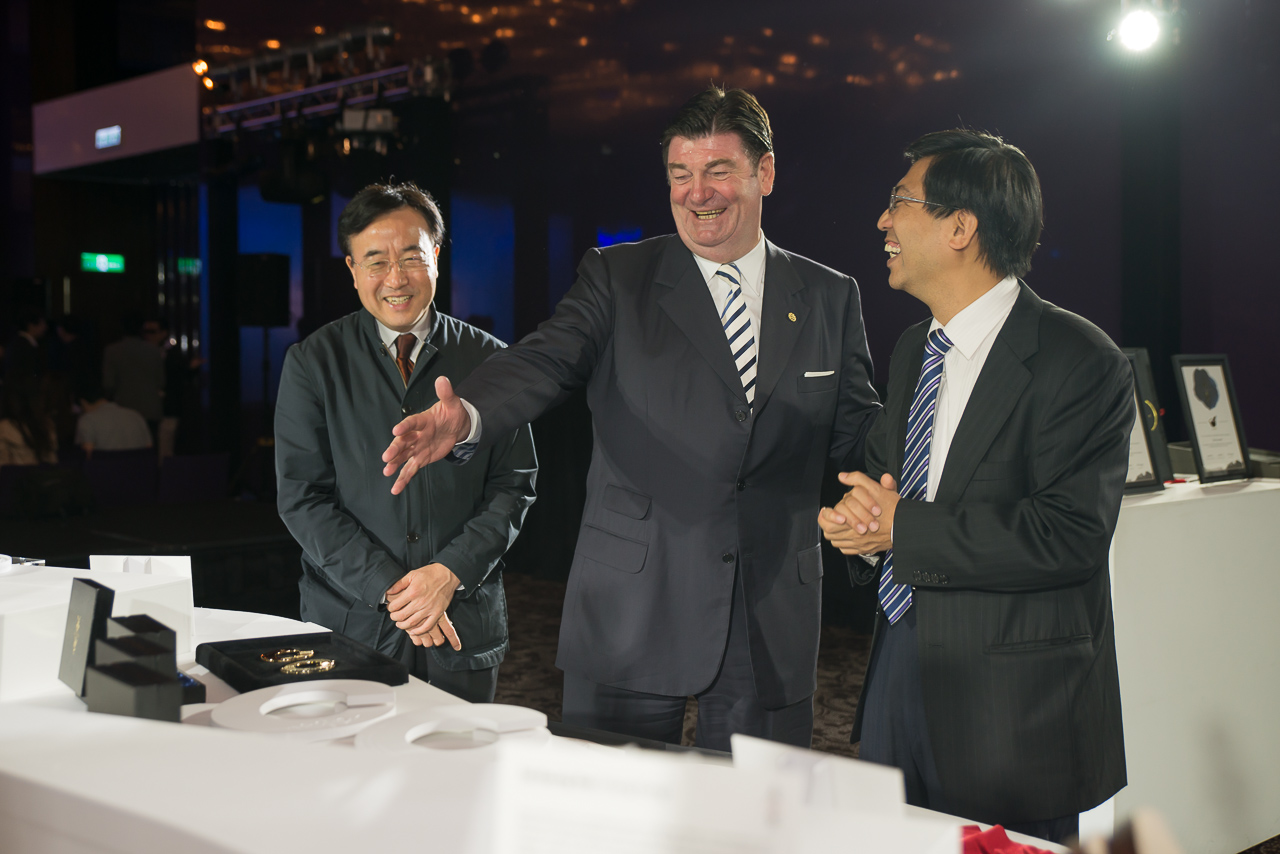 As we know, Naoto Fukasawa san is a designer who follows the idea “Less is more,” "Simplicity goes first” and in this spirit, he designed this new medal. So it’s a very simple but at the same time very strong, iconic design. And I think this covers perfectly the spirit of the Tang Prize.

So the jury is convinced that this medal will be so significant in the future. If you see just the picture on the television, in the movie or in the magazine, you will immediately recognize this is the medal of the Tang Prize.

So it is an original, innovative, unpredictable, and unexpected piece of design, and I think that’s why the jury gave the gold prize to Naoto Fukasawa san. Congratulations.

I think, on behalf of the jury, I can say thank you to the Tang Prize Foundation that you made this happen. You show so much respect to the work of the creative industry, to the work of designers. And the whole designing community has to thank you for this approach, the real good step into the future.

By doing this, I think the Tang Prize becomes the perfect role model, a signal to the world for the power of design in Taiwan.

I know this country since 1992 and I come frequently here. And I am happy that we have our Red Dot museum opened last year. So I am very familiar with the history of design in this country.

With the foundation of the first design promotion organization TAITRA, you’ve already in Taiwan set another role model which was followed by many other Asian nations of design promotion. So the spirit of design was awoke very early here in Taiwan.

And then later the Taiwan Designer Center took over the responsibility and I think that Taiwan Designer Center who is the core organizer of this award is a perfect organization, not just for Taiwan but also a role model for the world. The way you do your job is so professional, the way you cooperate with the industry, the society, and the students and universities is extraordinary. I think this is a lot of respect we should give to you for that.

Today, Taiwanese designers do not just compete among each other. Today, Taiwanese designers compete with the whole world. And they are not following, in many many cases they are leading. I know this from our Red Dot Awards. I know so (many) good industrial designers and communication designers we saw on the stage here before, and of course interior designers. So I think Taiwan is well-prepared for the future with these kind of creative people in your own roles. And I think you also have your own fantastic education system for designers. So take care on this and I wish you good luck for the future. And I am sure that you will make a good job and good business for the future.

And I am sure that the Tang Prize will not just be a waving flag. It will be a very strong light house, giving orientation to all the ships that cross and pass by Taiwan. All the ships of creativity, knowledge, and science expertise will come here, the best of the world will come because of the Tang Prize. Thank you very much for the world community for what you do.